Here’s what you need to know at the end of the day.

By Victoria Shannon and Judith Levitt

(Want to get this newsletter in your inbox? Here’s the sign-up.) 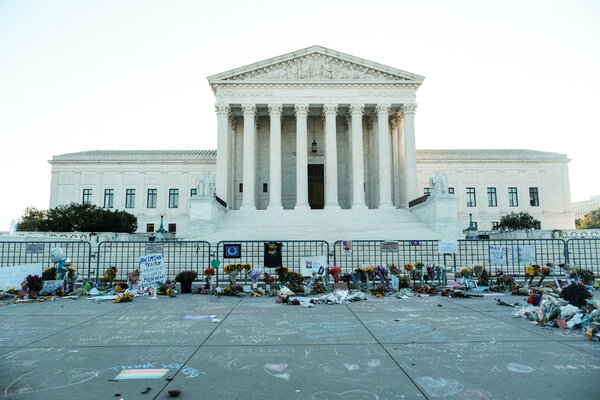 1. President Trump said he would name his nominee to the Supreme Court on Friday or Saturday.

That left Senator Mitch McConnell, the Republican majority leader, little time to lock up the support he would need to proceed on hearings and a confirmation vote before Inauguration Day, and possibly before the Nov. 3 election. Above, flowers in her memory at the Supreme Court in Washington.

With two Republican senators already objecting to a vote before Election Day, Mr. McConnell could afford to lose only one more from his 53-to-47 majority. Attention was focused on Mitt Romney of Utah, Cory Gardner of Colorado and Charles Grassley of Iowa, who have said nothing publicly about their intentions.

Judge Amy Coney Barrett is regarded as the leading contender to replace Justice Ruth Bader Ginsburg, who died Friday at 87. To conservatives and anti-abortion activists, Judge Barrett has the “perfect combination” of attributes for the Supreme Court.

2. Ruth Bader Ginsburg will be brought for a final time on Wednesday to the court where she served for 27 years.

Justice Ginsburg will lie in repose at the Supreme Court for two days during an unusual outdoor viewing aligned for the pandemic era. She will also lie in state at the Capitol on Friday.

President Trump, meanwhile, suggested that Democrats had concocted Justice Ginsburg’s dying wish that her replacement on the Supreme Court be chosen by the next president.

“I don’t know that she said that, or if that was written out by Adam Schiff, and Schumer and Pelosi,” Mr. Trump said, referring to Representative Schiff of California, Senator Chuck Schumer of New York and House Speaker Nancy Pelosi. The justice’s quote had been verified by journalists.

Amid the national outpourings of grief after her death were critiques of R.B.G.-mania, and perhaps even of the judge herself, as reflecting a myopic “white feminism.”

3. “We have, in a bad sense, literally turned the corner.”

That’s Chris Whitty, England’s chief medical officer, warning that Britain faces a six-month battle ahead to control the spread of the coronavirus.