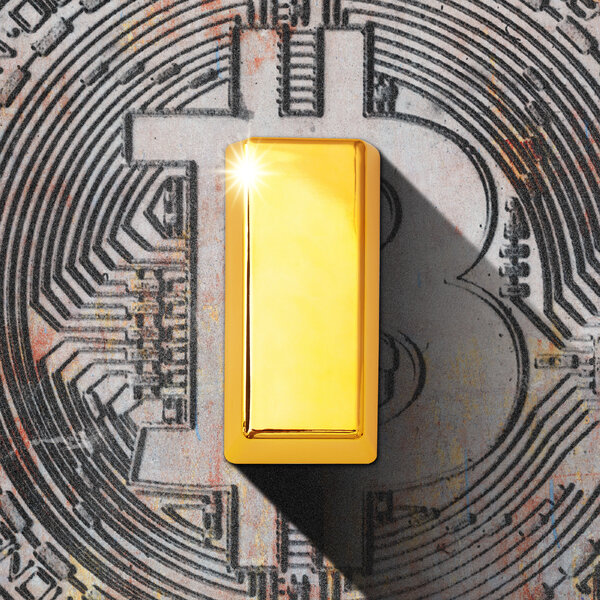 Jamie Dimon, the chief executive of JPMorgan Chase, recently had a few things to say about cryptocurrency. Bitcoin, he declared, is a “hyped-up fraud”; it’s a “pet rock.”

Tell us what you really think, Mr. Dimon.

Actually, Dimon seems to share the same view of Bitcoin that I and many other economists have had all along: The digital “currency” isn’t really a currency. That is, it can’t be used as a medium of exchange — there are very few things you can buy directly with Bitcoin — and it isn’t a stable store of value with reasonably predictable future purchasing power. So it’s basically useless — as Dimon says, it’s a pet rock.

However, one concern that has long nagged at sophisticated crypto skeptics is that most of the negative things one could say about Bitcoin can also be said about gold. You can’t buy groceries, or even a house, with gold ingots. And historically the purchasing power of gold has been highly unstable. Here’s a chart from Macrotrends of the real price of gold — the price divided by the Consumer Price Index — since 1970:

Gold has fluctuated between being a terrific investment and a terrible one, but in any case its purchasing power has been far less predictable than that of the dollar, even during periods of inflation.

Yet people still hold gold. A century has passed since John Maynard Keynes called the gold standard — and by implication the idea that gold is money — a “barbarous relic.” And he had a point! It turns out, however, that there are, and perhaps always will be, enough financial barbarians out there to sustain substantial demand for gold as a store of value even though it hasn’t served any monetary purpose for a very long time.

And some analysts have suggested that Bitcoin and other digital currencies will remain valuable even if they fail to become real money because they might take on some of gold’s historic role. Indeed, at the beginning of 2022 a Goldman Sachs analyst predicted exactly that, saying that Bitcoin would take market share away from gold.

Which brings me to the point of today’s newsletter: Is it possible that exactly the opposite has been happening?

Everyone knows about the problems with crypto, which have turned out to go far beyond the fact that there’s a lack of any clear reason for cryptocurrencies to exist. Even where outright fraud wasn’t taking place, there were strong pump-and-dump aspects to the whole thing. We now know, for example, that even as Peter Thiel was proclaiming “the end of the fiat currency regime” and suggesting that the price of Bitcoin could rise by a factor of 100, his venture capital fund was selling off almost all of its Bitcoin holdings.

I have, however, seen relatively little talk about the recent resilience of good, old-fashioned gold.

This comes as a bit of a personal surprise. In the aftermath of the 2008 financial crisis goldbugs used to yell at me all the time, insisting that surging gold prices were a verdict on the Fed’s reckless money printing and a harbinger of the coming hyperinflation. These days I get harangued about crypto all the time (the two best ways to generate hate mail are to criticize Bitcoin and to criticize Elon Musk), but I hardly hear anyone talking about gold.

Yet gold should be considered an interesting story. After all, Bitcoin has lost more than two-thirds of its value since its peak in late 2021, and many much-hyped stocks such as (cough) Tesla have fallen from grace, but gold has hung in there, with its current price just a few percent off its 2020 peak.

You might be tempted to say that investors are buying gold because they fear inflation. But that hasn’t worked for Bitcoin, which was also supposed to be an inflation hedge. And in any case, gold prices don’t actually seem to respond to expected inflation. What normally drives them, instead, are real interest rates: The inflation-adjusted yield on alternative investments. People didn’t buy gold in the 1970s because inflation was high; they bought gold because inflation was higher than the yield on U.S. government bonds. They bought gold again after 2008, even though inflation stayed low, because rock-bottom interest rates meant that the inflation-adjusted yield on bonds was extremely low, sometimes negative:

But if you look at the end of that chart, you see a puzzle. Real interest rates have risen substantially since the Fed began tightening policy to fight inflation. And rising real rates have helped drive down the prices of many assets — not just Bitcoin and Tesla but many other technology and meme stocks.

As we’ve discussed, normally, rising yields would decrease demand for gold. But it is hanging in there. Why?

I have a hypothesis — and it’s no more than that, although I encourage others to see if there’s a way to confirm or refute it. Here it goes: Cryptocurrencies, as I’ve long said, were buoyed by a combination of technobabble and libertarian derp. Well, libertarian derp will always be with us. But investors are losing faith in fashionable technobabble. They still want their pet rocks, but crypto’s plunges and scandals are causing some of them to return to pet rocks with centuries of tradition behind them — that is, gold, the pet rock of ages.

Does any of this matter? Mostly not. But I think it’s interesting, and offers a welcome break from grim worries about the debt ceiling.