Qualms about the vaccines’ development are not entirely misguided. But we can make amends for past injustice.

Mrs. Sargeant has written books about religion and community building and runs an online community that focuses on the dignity of interdependence. 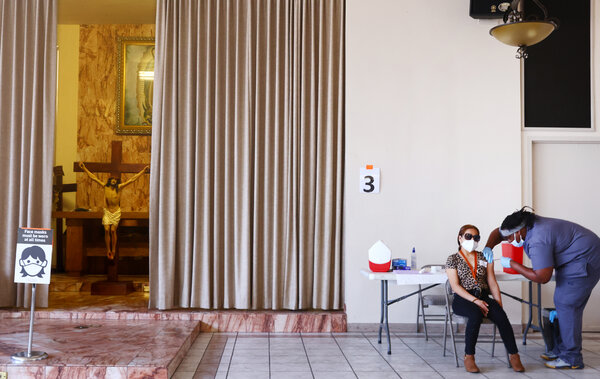 America is rapidly approaching the point where demand, not supply, is the limiting factor of our vaccine rollout. Our job now is hearing out the worries of vaccine-hesitant friends and trying to assuage their concerns. My fellow Catholics are one group in need of assurance.

Although the Vatican has stated clearly that the vaccines approved in the United States are “morally licit” to receive, some Catholics are reluctant because these vaccines have been developed or tested using lab-replicated cells cultured from aborted fetuses.

Bishop Joseph Strickland of Tyler, Texas, sent a letter to his diocese that read, “I urge you to reject any vaccine that uses the remains of aborted children in research, testing, development, or production.” On social media, the vaccine selfies I see are interspersed with friends sharing Bishop Strickland’s and other prelates’ exhortations and grieving over their friends’ willingness to compromise with what they see as evil. Vaccine-hesitant Catholics are reluctant to accept protection from viral contagion at the risk of moral taint.

I’ve gotten both my shots and I strongly believe other Catholics should get vaccinated, too. But I don’t think those qualms are entirely misguided, and they’re not limited to vaccinations. When we reap the benefit of what we see as a past injustice, we are implicated in the original wrongdoing. We have to decide if our actions compound the original abuse and what kinds of reparations we must make.

The Jesuits of Georgetown University have been wrestling with a similar question of moral contamination. The order funded the school partly through the exploitation and sale of slaves. To make amends, the university has begun a fund-raising campaign to pay reparations to the descendants of those slaves. But a Georgetown professor still has to ask the same question as a someone rolling up his sleeve for the vaccine: Can I accept a benefit premised on someone else’s suffering?

The Vatican has ruled that the coronavirus vaccines represent remote material cooperation with evil. The cell lines are not dependent on continued abortions — each is derived from a fetus aborted decades ago, and the fetus’ cells are kept growing in lab cultures. The cell lines keep going after the cells that were originally part of the fetus have died. These fetuses were not conceived or aborted for the sake of using their cells and, in one case, may not have been aborted at all.

The Moderna and Pfizer vaccines used these fetal cell lines to test their vaccines, while Johnson & Johnson’s — which is now suspended — relied on them for both testing and to produce the adenovirus vector (a common-cold virus that’s been altered to make it harmless) used in its vaccine. None of the vaccines contain fetal cells. Catholics are free to receive the vaccines, though we’re also called to advocate scientists to seek more ethical sources of cells.

The bioethicist Gilbert Meilaender of Valparaiso University argued in First Things, a journal about religion and public life, that the ethics of these cell lines’ continued use turns less on the morality of abortion and more on how we safeguard the dignity of the dead. He compares the use of these cells to the question of whether it is licit to receive an organ transplant from a homicide victim. The evil of the murder doesn’t cling to the organ recipient, who did not will the victim’s death.

However, a murder victim has a voice in her choice to opt into organ donation. The victim does not need to fear that she will be reduced purely to her organs — her humanity was not in question in the first place. Aborted fetuses don’t have the same assurance. The doctors who stop their hearts are in the medical profession, just like the researchers who culture their cells.