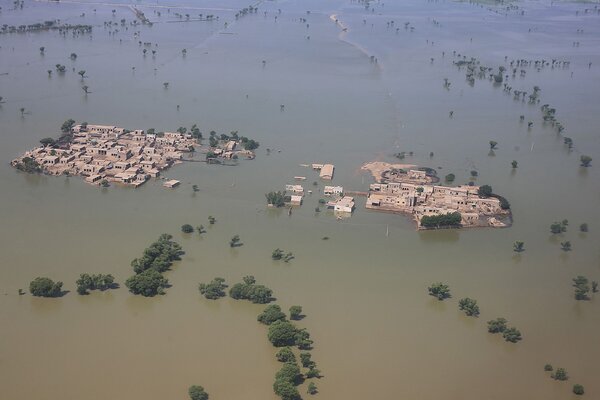 Ms. Bhutto is a Pakistani writer and the author of the novel “The Runaways.”

We heard the story all the time, told as a warning: When man first set foot on Earth, all the winged animals flew high into the sky and the fish dived deeper into the sea, scattering in fear, because they knew the destroyer of the world had arrived.

What is folklore but prophecy?

Today, one-third of my country, Pakistan, is submerged under water. After unusually intense monsoon rains fell over several weeks, the waters from flash floods made their way into the Indus, overwhelming the riverbanks. According to climate experts, rapidly melting glaciers caused by rising temperatures added to the downward rushing superflood of epic proportions.

One in seven Pakistanis have been affected, with many sleeping under open skies, without shelter. About 900,000 livestock have been lost, and more than two million acres of farmland and 90 percent of crops have been damaged. In some provinces, cotton and rice crops, date trees and sugar cane have been nearly obliterated, and half of the onion, chili and tomato crops, all staple foods, are gone. Over 1,350 people are dead, and some 33 million people (50 million according to unofficial tallies) have been displaced.

The worst hit province of Sindh, in the south, suffers in extremis. Sindh does not appear to have any disaster preparedness, or any plans in place to reinforce water infrastructure or the barely functioning sewage system.

The survivors, the majority of whom are poor, must now avoid hunger and disease lurking in the rising, fetid flood water. More rain is predicted. Much of Sindh is close to sea level, which means that the floodwaters from the north will continue rushing downstream.

In 2019, Philip Alston, the United Nations’ special rapporteur on extreme poverty and human rights at the time, warned that global heating would undermine basic rights to water, food and housing. We faced a future, Mr. Alston said, where the wealthy will pay to avoid these deprivations while the rest of the world suffers.

The Global North can help the poor of the Global South by taking responsibility for the losses and damages of extreme weather fueled in part by the burning of fossil fuels. The impacts of decades of fossil fuel burning are already too severe, and apply too unevenly to the poor, for the Global North to deny culpability.

In 2010, a year that we were also deluged, Pakistan’s Meteorological Department recorded nationwide rains 70 to 102 percent above normal levels. Locally, the numbers were more terrifying — in Khanpur, a city in Punjab, it was 1,483 percent above normal. The rivers swelled and the Indus and its tributaries soon burst their banks. A dam failure created floodwater lakes. USAID estimated that 1.7 million homes were damaged and more than 20 million people were affected. The economic losses were around $11 billion, and a fifth of the country had been affected.

Today’s superflood may well prove to be worse — at one point in Sindh Province, rainfall was 508 percent above average.

The International Monetary Fund has released $1.17 billion in funds to Pakistan that had previously been allocated for a government bailout in 2019. The secretary general of the U.N. has also asked member states to give $160 million. But I.M.F. money comes with painful strings attached for countries like Pakistan, and it will not be enough to rebuild, nor to prevent future disasters. This is climate change. It is relentless and furious, and this is not the worst we have seen of it.

The lack of attention on Pakistan is heartbreaking: Too few major international cultural figures are speaking up for us in this moment of crisis. It is either a snide form of racism — that terrible things happen to places like Pakistan — or else an utter failure of compassion. But Pakistan has long been a cipher, a warning for the world, just like those old stories. And so the wealthy world would do well to pay attention. The horrors that Pakistan is struggling with today could soon come for everyone.

Fatima Bhutto is a Pakistani writer and the author of the novel “The Runaways.”