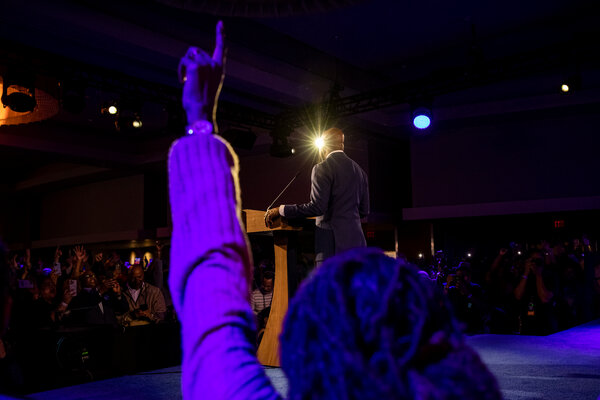 I’m a strong advocate of Black reverse migration — Black people returning to Southern states from cities in the North and West in order to concentrate political power.

This reverse migration was already happening before my advocacy, and it continues. As the demographer William H. Frey wrote for the Brookings Institution in September, the reversal “began as a trickle in the 1970s, increased in the 1990s, and turned into a virtual evacuation from many Northern areas in subsequent decades.”

One of the ways that people often push back on what I’m proposing is to worry aloud about the opposition and backlash to a rising Black population and power base in Southern states.

Well, Georgia is providing a proving ground for this debate in real life.

I heard so many people after the Georgia runoff in which Raphael Warnock defeated Herschel Walker who said some version of “Yes, but it was still too close.”

It seemed to me that those comments — and many others — missed the bigger point: Something absolutely historic is happening in Georgia that portends a massive political realignment for several Southern states.

Georgia voters proved this year that the historic election of a Black senator from a Southern state by a coalition led in many ways by Black people was not a fluke.

And that coalition sent Warnock back to the Senate in the face of fierce opposition. Not only did the Georgia state legislature and Gov. Brian Kemp do their best to suppress voters — a tactic almost always designed to marginalize nonwhite voters — but Republicans also turned out in droves to try to retain power that they see slipping from their grasp.

Furthermore, in the general election, Black turnout was down. According to Nate Cohn, the Black share of the electorate fell to its lowest level since 2006.

But then in the runoff, when the choice was narrowed and sharpened, the Warnock coalition bounced back, stronger and defiant.

According to the Georgia secretary of state’s office, Black voters only account for 29 percent of registered active voters in the state. During early voting, Black voters outperformed. They went to the polls to prove a point. They voted to flex. According to a Pew Research Center report, the number of Black people registered to vote in Georgia increased 25 percent from 2016 to 2020, a far larger increase than any other racial group.

Yes, many, like me, were offended by the presence of Walker as the alternative, and were voting as much to defy Walker as to affirm Warnock.

But even there, I think we have to step back, take a breath, and soberly assess how historic his presence was. The power structure in Georgia was so shocked by what this Black-led coalition had done that they allowed Donald Trump to foist a thoroughly unqualified Black Republican on them, thinking that he would help them win back power.

Georgia Republicans thought they could fracture the Black vote. They couldn’t. It held strong and united.

There is a great, nearly inexpressible exhilaration in this realization as a Black citizen and voter. Black people and other minorities weren’t simply being called upon to tip the balance when white voters split down the middle. Every other Black senator in American history has been elected by a coalition led by white liberals. Warnock is the first elected by a coalition led by Black people.

Black people were leading the charge in his election, and he was solid, bright and competent. This startling new reality of electoral politics demolished any lingering lies about inferior Black leadership or intemperate Black voters. Black voters want what any other voter should want: solid leaders who are responsive to them.

Some may look at the defeat of Stacey Abrams in the governor’s race and see it as a sign of caution, that the “Old South” is alive and well. But I see it differently. Power will not be passively relinquished. Those with it will fight like hell to retain it. And in that power struggle, they will win some of the battles.

Each election will depend on candidates and campaigns. The race between Kemp and Abrams is not a predictor of what is possible. Black voters in Georgia keep reminding themselves what’s possible when they focus their attention and effort as they did in this runoff.

That kind of engagement — and the reward of winning — is psychologically powerful. Once a people taste power, state power, it seems to me that it will be hard to turn away from it. Having it begins to feel normal and expected.