A woman was killed in the riot on Wednesday — shot in the Capitol by a police officer. Her death shouldn’t have happened, and it should now be investigated, no question. What’s frightening, however, is that many Trump supporters are already heralding her as a martyr. “Say her name” advocates of Wednesday’s coup attempt have tweeted, co-opting the language of the Black Lives Matter movement.

A dead or injured white woman — even the illusion of one — has always been a powerful symbol on the far right, a rallying cry for people to stand up and act to preserve their contorted notions of honor, liberty and purity. Consider the apocryphal stories of sexual violence that led to countless lynchings. Or of Ruby Ridge in Idaho, in 1992, when federal agents killed an unarmed white woman during a botched raid: “When the Feds blew the head off Vicki Weaver I think symbolically that was their war against the American woman, the American mother, the American white wife,” an acolyte of the far right, a pastor, said at the time. “This is the opening shot of a second American Revolution.” Right-wing activists have been citing Mrs. Weaver’s death ever since as evidence that they stand for what is good and right: family and freedom.

How will they twist the death on Wednesday now, even if the mob brought the violence to the state, and not the other way around?

We can’t remedy the past errors that brought us here, but we can avoid new ones, starting by rejecting the assumption that Wednesday’s events won’t lead to something worse. Just because a coup attempt fails doesn’t mean the next one will.

History holds important lessons, if only we are willing to hear them. This moment — men and women breaching the Capitol’s barricades, entering the chambers of Congress and demanding the nullification of the presidential election based on nothing more than lies and conspiracy theories — is a culmination, but it is not an ending. It is not, as some pundits have suggested, white supremacy or Trumpism’s “last gasp.” It is the manifestation of a long-held right-wing fantasy. Opponents of democracy stormed the nation’s seat of power. They walked out, many unscathed and uncuffed, to fight another day.

They told us they were going to do it, and they did.

It’s useful to remember the story of Earl Turner. He is 35, white, unemployed, racist and angry. The world is changing too fast for him: The economy is in shambles, Jewish people wield more power than he thinks they should, Black Americans incite chaos, and the government is cracking down on civil liberties, including the right to bear arms. Turner refuses to sit by, so he joins a movement plotting to overthrow the government. He wants to install right-wing rule by any means necessary. He is frustrated by those he judges to be merely “conservative,” people who talk but don’t act. Turner and other zealots go to Washington to do their part, and violence ensues.

Earl Turner wasn’t one of the people who stormed the Capitol on Wednesday. He isn’t even real. He is the titular character of “The Turner Diaries,” a racist dystopian novel published by a white supremacist named William Luther Pierce in 1978, in which right-wing guerrilla operatives terrorize the streets of Washington, bomb the FBI and commit atrocities against fellow citizens. Still, Turner was very much present on Wednesday. The plot, symbols and language of Mr. Pierce’s novel have seeped into the right-wing imagination, influencing generations of extremists. “The Turner Diaries” is so influential, in fact, that experts on white nationalism sometimes refer to the book as the movement’s bible.

Think I’m overstating? A gallows was erected in front of the Capitol on Wednesday. As Hannah Gais, a senior researcher for the Southern Poverty Law Center, noted on Twitter, some of the more than 5,000 viewers of a livestream hosted of the siege proclaimed “hang all the congressmen” and “give them the rope.” These were allusions to an event in the “The Turner Diaries” known as the “day of the rope,” when the terrorists lynch their enemies: “the lawyers, the businessmen, the TV newscasters, the newspaper reporters and editors, the judges, the teachers, the school officials, the ‘civic leaders,’ the bureaucrats, the preachers.” And, yes, “the politicians.” 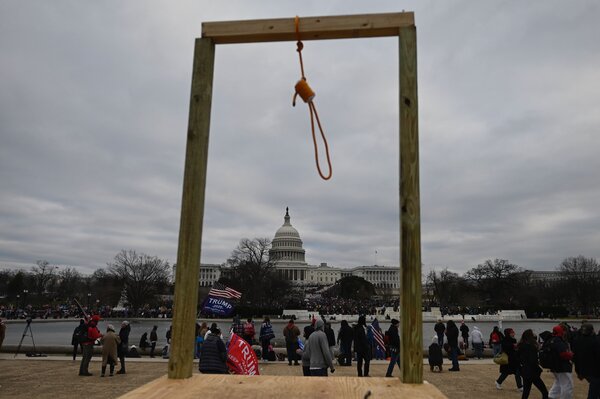 Did the people who made the allusions read the novel closely? Perhaps yes; more likely no. Either way, the legacy of “The Turner Diaries” was all around them well before Wednesday, in the forums, communities and networks that feed far-right sentiment unabated.

This moment was a long time coming. Its origins predate President Donald J. Trump encouraging his supporters to reject the election results and their planning — out in the open — to do so. It predates Mr. Trump taking office, or even considering a presidential run. As people who study right-wing extremism know well, the seeds of this attempted coup were sown decades ago.

Why, then, was America so unprepared? Experts on extremism know the answer to that question, too.

Establishment institutions have long treated the threat of right-wing violence as a fringe matter. The government has done it, all but defining terrorism as a crime that could only be perpetrated by people who weren’t white. Law enforcement has done it, nourishing extremism in its own ranks.

The press has been complicit, too, perpetuating narratives about “lone wolves” and “isolated incidents” rather than doing the urgent work of connecting the dots. Rather than showing how, say, the language in a terrorist’s manifesto sounds a hell of a lot like the bigoted garbage spewed by pro-Trump YouTube pundits. Or how the occupation of the Michigan statehouse and plot against Gov. Gretchen Whitmer last year echoed previous anti-government efforts staged by right-wing activists, some dating back a few years, others decades.

There are many reasons for these failures, including the blinders that white supremacy places on many Americans. Too many assume that the nature of right-wing networks — where infighting and splintering are common and communication takes place largely online — means its believers can’t pose a meaningful collective threat. They can, and do, and so here we are, in the first week of 2021, watching unwelcome history unfold in Washington.