In “Unpregnant,” the HBO bildungsroman released this month, the plot revolves around a 17-year-old heroine who travels from Missouri to Albuquerque — a road trip of 1,000 miles — because that’s the nearest place she can get an abortion without parental consent. Watching it made me recall a conversation with a feminist friend, who shocked the hell out of me last year by saying that progressives were too focused on protecting Roe v. Wade.

Why? The argument is that we currently have the worst of both worlds. We’ve basically lost the abortion fight: If Roe is overturned, access to abortion will depend on where you live — but access to abortion already depends on where you live. At the same time, we have people voting for Trump because he’ll appoint justices who will overturn Roe. Maybe it is time to face the fact that abortion access will be fought for in legislatures, not courts.

I was shocked, but I could see the logic. It’s true that abortion access is already abysmal. The stressful road trip in “Unpregnant” is actually in some ways a best-case scenario; many women seeking abortions aren’t suburban teenagers without economic pressures or family responsibilities. Nearly 60 percent have already had one child and nearly half live below the poverty level; some fear they’ll be fired if they take time off, particularly if they need to make two trips, as they must in the 26 states with mandatory waiting periods.

The argument that the left has already lost the abortion fight reflects the fact that there’s no abortion clinic in 90 percent of American counties. This is the result of the highly successful death-by-a-thousand-cuts anti-abortion strategy, which has piled on restriction after restriction to make abortion inaccessible to as many American women as possible.

Chief Justice Roberts’s concurring opinion this summer in June Medical Services v. Russo — the one that mattered — was hailed as a surprise victory for abortion rights, but not by me. Justice Roberts refused to uphold Louisiana restrictions virtually identical to those the court struck down as unconstitutional just four years earlier, but clearly stated that his reluctance was because of his respect for precedent. Anyone with their eyes open could see the justice signaling to abortion opponents to continue the process of eroding Roe v. Wade’s nigh-absolute protection of access to abortion during the first trimester by inventing new types of restrictions, which they have been remarkably creative in doing.

If Judge Amy Coney Barrett becomes the next Supreme Court justice, Justice Roberts’s vote will be irrelevant, anyway. And if things already looked pretty grim, now they look much worse: Up to 21 states have passed laws banning or limiting abortions in ways that are currently unconstitutional. Many will go into effect immediately if Roe is fully overturned.

So what should we do now? Often forgotten is that R.B.G. herself had decided that Roe was a mistake. In 1992, she gave a lecture musing that the country might be better off if the Supreme Court had written a narrower decision and opened up a “dialogue” with state legislatures, which were trending “toward liberalization of abortion statutes” (to quote the Roe court). Roe “halted a political process that was moving in a reform direction and thereby, I believe, prolonged divisiveness and deferred stable settlement of the issue,” Justice Ginsburg argued. In the process, “a well-organized and vocal right-to-life movement rallied and succeeded, for a considerable time, in turning the legislative tide in the opposite direction.”

What Ginsburg called Roe’s “divisiveness” was instrumental in the rise of the American right, which was flailing until Phyllis Schlafly discovered the galvanizing force of opposition to abortion and the Equal Rights Amendment. Schlafly wrote the culture wars playbook that created the odd coupling of the country-club business elite with evangelicals and blue-collar whites. In exchange for business-friendly policies like tax cuts and deregulation, Republicans now allow these groups to control their agenda on religion and abortion. It’s hard to remember now but this was not inevitable: abortion was not always seen as the partisan issue it is today, nor did evangelicals uniformly oppose abortion.

Whether or not R.B.G.’s assessment of Roe was correct, the best tribute we can pay to her is to do what she suggests: open up the kind of dialogue that occurred in Ireland, where young people knocked on grannies’ doors and persuaded them to vote to legalize abortion, which — much to the distress of the Catholic Church — they did. (At the same time, activists galvanized to ensure that, in the absence of a referendum, women throughout the country would have access to and knowledge about medication abortions.) 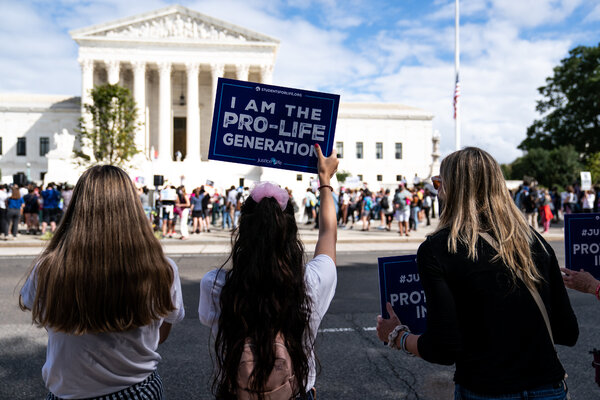 I don’t want Roe to be overturned, but if that happens, it could bring political opportunity. The emotional heat that surrounds abortion as an issue manages to obscure that the attitudes driving opposition to abortion actually reveal some surprising common ground with progressives on economic issues.

Non-elites often see elites’ obsession with abortion rights as evidence that they are slaves to ambition who don’t see that “family comes first.” But look closer and one can find embedded in this ideology a powerful critique of capitalism: “I think we’ve accepted abortion because we’re a very materialistic society and there is less time for caring,” as one woman told the anthropologist Faye Ginsburg. The feminist historian Linda Gordon agreed: Those against abortion “fear a completely individualized society with all services based on cash nexus relationships, without the influence of nurturing women counteracting the completely egoistic principles of the economy.”

I’m still reluctant to embrace the “overrule and move on” strategy, but moving on may be our only choice. And if abortion stops playing such a role in presidential elections, then Democrats may fare better with the 19 percent of Trump voters who have bipartisan voting habits and warm feelings toward minorities; we know 83 percent of them think the economy is rigged in favor of the rich and 68 percent favor raising taxes on the rich.

Once their presidential vote is not driven by Supreme Court appointments, how many might decide to vote on economic issues? And what greater tribute could there be to R.B.G. than both a legislative restoration of abortion rights, and a new Democratic Party that can win — not just by a hair but by a landslide?

Joan C. Williams is a professor of law at the University of California, Hastings, College of the Law and the author of “White Working Class.”