You’ve probably heard of Alexandria Ocasio-Cortez, but you may not have heard of Derek Kilmer. Kilmer grew up in a timber region in Washington State that had seen many of its logging jobs disappear. First at Princeton, then getting a Ph.D. at Oxford, he studied how towns recover from deindustrialization. He went back home to help his community recover economically and now represents that community in Congress.

You may not have heard of Kilmer or even the New Democrat Coalition. The media wing of the Republican Party wants to pretend that A.O.C., the Squad, Bernie Sanders and Elizabeth Warren are the Democratic Party because it wants you to think Democrats are a bunch of socialists.

Progressive Twitter is far to the left of the actual Democratic Party and it also emphasizes A.O.C., Sanders and Warren because that’s what makes its heart flutter. Even the mainstream media pays far more attention to the Squad than to Kilmer or moderates like Abigail Spanberger.

This week a thoughtful scholar at the American Enterprise Institute, Danielle Pletka, fell for the mirage. She wrote an op-ed for The Washington Post in which she disdained President Trump but said she would have to vote for him because the Democrats have moved so far left.

Pletka’s essay kicked up a storm, but usefully raised the question: Where exactly is the Democratic Party?

The professionals who actually run the party do not fall for the mirage. Nancy Pelosi understands that her job is to manage a group that includes both A.O.C. and the New Democrat Coalition’s members.

House Democrats began this Congress with nine bills that were their top priorities. They were about such things as infrastructure spending, lower prescription drug prices, voting rights, gerrymandering and democracy reform, and rejoining the Paris climate accords.

The Green New Deal and so-called Medicare for all were not on the table. Pelosi was promoting ideas a majority of the House Democrats could agree on, and these ideas are not radical left.

Joe Biden has the same approach. Biden was arguably the most moderate of the nearly 30 Democrats who ran for president in the past year. The team around him, the folks who would presumably lead his administration, are Clinton/Obama veterans and not exactly a bunch of left-wing woke activists: Mike Donilon, Ron Klain, Anita Dunn, Jake Sullivan, Jeff Zients and Bruce Reed, one of the leaders of the moderate Democratic Leadership Council. 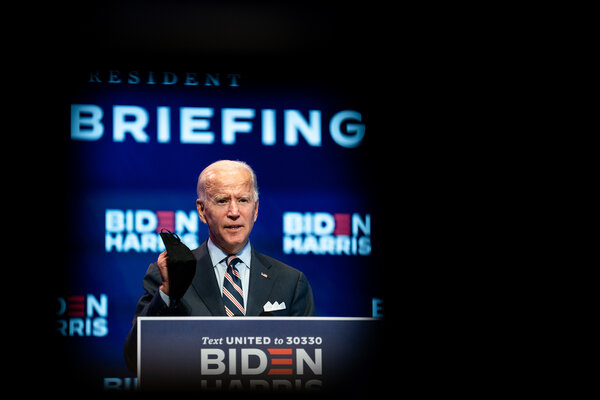 They understand they are leading an extremely broad coalition and have done an excellent, underappreciated job of incorporating both moderate ideas and ideas from the Bernie Bros.

A Biden administration would not be further left than the Democratic voters out in the country or their representatives in Congress. Those voters are not mostly the urban gentrifiers who propel the left; they are mostly the “somewhat liberal” suburbanites and Black moderates who gave Biden the nomination.

In 2018, those voters massively rejected almost all of the nearly 80 Sanders-like insurgents the left put up to challenge more moderate incumbents in primaries. This year, with only three exceptions, they’ve done the same. This week Senator Chris Coons of Delaware held off a Medicare-for-all, Green New Deal challenger 73 percent to 27 percent.

If you ask whether the Democrats shifted too far left, my answer is: The party has gotten more ideologically diverse, but there is a large, strong center that will keep it in the political mainstream.

But there is a prior and more important question here: Are the Democrats a political party?

You might have thought that the Democratic and Republican Parties are different versions of the same thing, but that’s no longer true. As Jonathan Rauch of the Brookings Institution has noted, the G.O.P. is no longer a standard coalition party. It’s an anti-political insurgency that, even before Trump, has been elevating candidates with no political experience and who don’t believe in the compromise and jostle of politics.

The Democrats are still a normal political party. In 2020 they rejected the “base mobilization” candidates who imagine you can magically create a revolutionary majority if only you go purist.

Biden is a man who doesn’t do culture war, who will separate the cultural left from the political left, reduce politics back to its normal size and calm an increasingly apocalyptic and hysterical nation.

The Democratic Party is an institution that still practices coalition politics, that serves as a vehicle for the diverse interests and ideas in society to filter up into legislation, that plays by the rules of the game, that believes in rule of law. Right now, it is the only major party that does that.