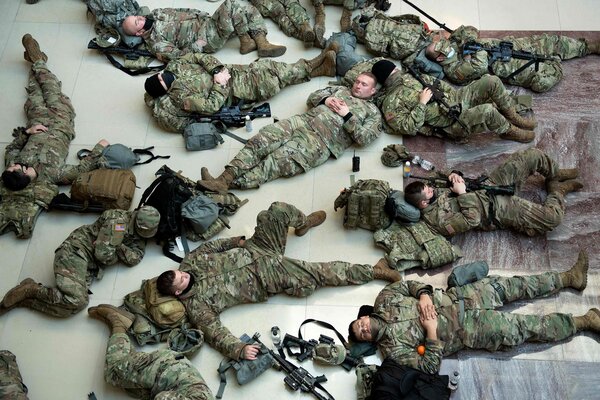 Mike Lindell, founder of MyPillow and a fervent Trump supporter, recently missed a golden opportunity. The photos of large numbers of National Guard members sleeping on the hard marble floors of the Capitol — and even a nearby parking garage — with nary a pillow among them drew sympathy and outrage.

I suspect that a quick delivery of thousands of MyPillows would have been most welcome and a public relations bonanza for Mr. Lindell.

The ubiquitous use of “conspiracy theory” referring to the circulation on the web of dark plots within government is itself misinformation. “Theory” refers to analysis spun around a thread of truth, at least.

More accurate and healthy would be the term “conspiracy fantasy.”

I consider myself a fiscal moderate and social liberal and in the past 20 years have voted for both Democrats and Republicans. I have watched this month with fascination at the strong bipartisan support for President Biden’s cabinet nominees so far. This is a substantial improvement over the deeply partisan votes for most of President Donald Trump’s nominees.

Agree or disagree with the assessments of the nominees as you wish, but this is a positive development in our hyperpartisan world and should be applauded — if for no other reason than to show our younger generations that all is not lost for America’s future.

TV Everyone Can Watch

As families spend more time together during the pandemic, they are resorting to watching adult-rated TV shows that are probably going to be inappropriate for children, or even harmful. Why? Because Hollywood very rarely produces programming that is appropriate for the entire family to view together. But increasingly, that is what families want.

Hollywood should realize that this is a golden opportunity to better serve an underserved market. At the same time, parents should remember that even though they might be there to mitigate harmful messages, they are still only mitigating.

Watching explicit content with children does not entirely eliminate the harm done by exposing them to content that is neither emotionally nor developmentally appropriate.

Tim Winter
Burbank, Calif.
The writer is president of the Parents Television Council.