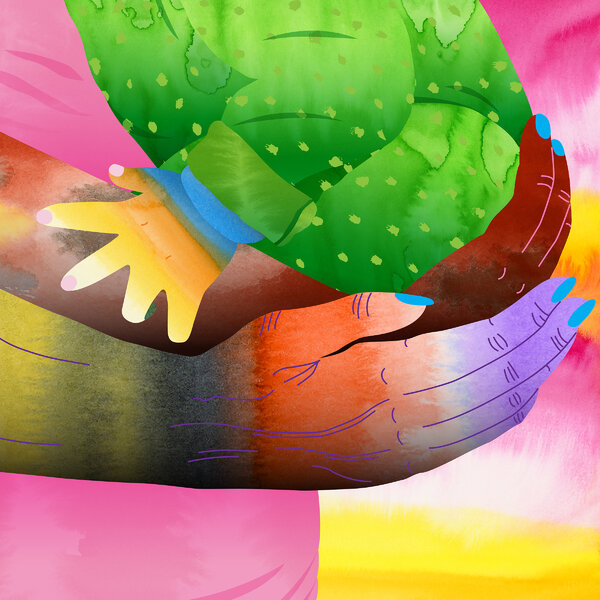 Re “Whale Mothers Need Their Moms. So Do I,” by Abigail Tucker (Sunday Review, May 2):

The research cited in this article supports a compelling link between the presence of a warm, available maternal grandmother and positive mother-child outcomes. But women without such mothers can and do become wonderful mothers themselves, despite what is presented as a critical deficit.

Over the last 27 years, I’ve interviewed hundreds of women who were children, adolescents and young adults when their own mothers died. These women often feel a lack of confidence as parents, particularly around raising children past the age they were when their mothers died.

They may feel anxious about dying young. They are also prone to resurgences of grief when a first child is born, which can be mistaken for postpartum depression.

Yet they are also capable of becoming attentive, empathetic, profoundly grateful mothers who relish the time they get to spend with their children. They develop creative ways to keep their mothers’ memories alive.

Not every young mother is fortunate enough to have a living or engaged mother to help her. Many of those who don’t resourcefully compensate for what’s missing. As Mother’s Day approaches, let’s give these mothers the encouragement, appreciation and recognition they deserve.

Hope Edelman
Topanga, Calif.
The writer is the author of “Motherless Daughters” and “Motherless Mothers.”

I hate to be the dark cloud hovering over Farhad Manjoo’s solar array (“The Wind and Solar Boom Is Already Here,” column, April 30), but while those who care about climate stability should applaud the growth of renewable energy sources like wind and solar, fossil fuel industry expansion into worrisome markets should concern us all.

As the Center for International Environmental Law has reported, for instance, the fossil fuel industry is moving rapidly into plastics, including investing heavily in expanding or building new petrochemical facilities to ramp up production. The industry is also eyeing pesticides and ammonia fertilizer, eager to exploit the emerging demand in soil carbon markets with fossil-fuel-dependent agricultural models.

If we care about getting the climate crisis under control, we have to look at all the profitable but destructive outlets for the fossil fuel industry, including plastics, pesticides and fertilizers.

Anna Lappé
Berkeley, Calif.
The writer is the author of “Diet for a Hot Planet.”

Re “‘The Mountains Are Reaching Out to Us,’” by Elouise Wilson, Mary R. Benally, Ahjani Yepa and Cynthia Wilson (Opinion guest essay, April 26):

Thank you for the essay by these Native American women, who speak up in defense of Bears Ears in Utah.

I am far away from the region whose minerals built my bones, but I understand the tug of the ancestral umbilical cord mentioned by the writers.

Where the land is exploited ruthlessly, those who have little power and no voice are generally exploited and disenfranchised as well. Rematriation and a more familial relationship to our environment seems like a powerful antidote to the profit-based extraction economics that is destroying our planet.

I stand with these women in speaking out for our children and our animal and plant relatives, and I hope that their simple truth will prevail!

The U.S. Should Invest in Chip Production

The global chip shortage is one of many economic disruptions caused by the pandemic, and its impact has been felt by automakers and a range of other sectors.

Chip demand from automakers fell abruptly after the onset of the pandemic, then rebounded rapidly. And chip makers have ramped up production for cars to meet that renewed demand. As a result, starting in October 2020, global monthly sales of chips to the auto market were higher than they were the year before, and that trend has continued into 2021.

We must learn from the shortage and take action to strengthen the long-term resilience of America’s semiconductor supply chains. The U.S. government can help by investing boldly in domestic manufacturing and research. Doing so will level the global playing field, turbocharge American chip innovation and ensure that more of the semiconductors America needs are produced on U.S. shores.

John Neuffer
Washington
The writer is president and chief executive of the Semiconductor Industry Association.