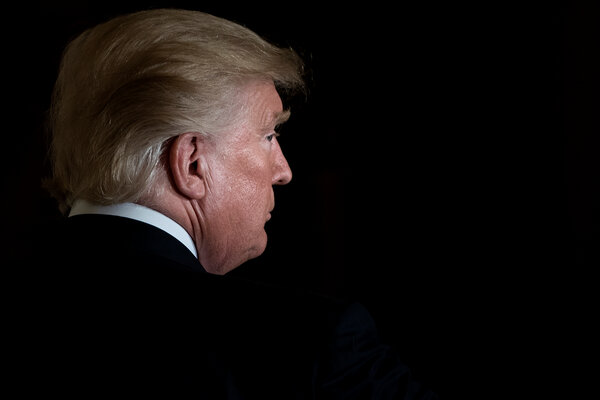 It may well be that “real” authoritarians don’t actually lose elections. But at this point in time, we can safely say that there’s no question that Donald Trump was determined to overturn the 2020 presidential election and end American constitutional government in order to stay in office.

According to my colleague Katie Benner, reporting for The Times, Trump repeatedly pressured the Justice Department to “just say the election was corrupt” and “leave the rest to me” so that “he and his allies in Congress could use the assertion to try to overturn the results,” as indicated in notes taken by Richard Donoghue, who was then the acting deputy attorney general.

As with the entire effort to overturn the results of the election, Trump’s behavior was as clumsy as it was in earnest. He truly wanted the Justice Department to give him a pretext for some kind of (presumably drastic) action, but the most he could do in pursuit of this goal was to complain to top officials on the phone. “The conversations often included complaints about unfounded voter fraud conspiracy theories,” Benner notes, “and admonishments that department leaders had failed to fight hard enough for Mr. Trump, the officials said.”

But a haphazard attempt is still an attempt. That Trump is an absurd figure does not mean we should treat his drives and desires as unthreatening. This was true when he was in office, and it is true now, while he is still trying to “stop the steal.”

The plot that began the night of the election when Trump demanded that the states stop counting ballots — “We want all voting to stop” — has not actually come to an end. It is ongoing, pushed forward by the former president and his allies in and out of government. And the current narrative behind the plot — that Trump is the rightful president, that Biden stole the election and that the Jan. 6 insurrection was a righteous rebellion against Democratic fraud and subversion — has all but migrated into the Republican Party mainstream.

For a clear picture of the former president’s influence on the Republican Party, look no further than the effort to investigate the attack on the Capitol. Republican leaders in the House and Senate opposed and then killed a bipartisan 9/11-style commission to study the events of Jan. 6, on the grounds that it would be a “purely political exercise,” as Mitch McConnell, the Senate minority leader, put it.

When, in response, House Democrats announced a select committee to investigate the attack (under the direct control of Speaker Nancy Pelosi), House Republican leaders were furious. “This select committee is likely to pursue a partisan agenda to politicize the Jan. 6 attack instead of conducting a good faith investigative effort into the actions leading up to and the security failures of the 6th,” Steve Scalise, the House minority whip, said.

Kevin McCarthy, the House minority leader, was given a chance to appoint Republican representatives to the select committee. He chose members known for their total devotion to Trump, like Representatives Jim Jordan of Ohio and Jim Banks of Indiana, who both refused to certify the election results in January and signed a brief to the Supreme Court asking the justices to overturn the presidential results. Pelosi removed Jordan and Banks from the commission, bringing on another round of additional outrage and partisan blowback.

In short, Republican leaders have refused to commit to an actual investigation of the storming of the Capitol. The reason is simple: Trump has made cooperation grounds for expulsion from the party. The virtual pariah status of Representatives Liz Cheney and Adam Kinzinger — the two Republican members Pelosi named to the commission — is proof enough.

But events in Washington are not the only evidence of how Trump’s obsessions have become the obsessions of much of the Republican Party. Republican voters themselves are all-in on the former president’s message. Fifty-three percent of Republicans view Trump as the true president, according to a ReutersIpsos poll conducted in May, and about half of Republicans believe the Capitol attack was the work of left-wing activists “trying to make Trump look bad,” according to a Reuters/Ipsos poll in March.

At the state level, Republican lawmakers and conservative activists are fighting to engineer a pretext for “stop the steal” ahead of the 2022 and 2024 elections. In Arizona, this has taken the form of an “audit” of the 2020 vote organized by the state Republican Party.

It would be easy to dismiss the Arizona audit as a joke; a parade of clownish incompetence not unlike the efforts of Trump in the aftermath of the election. According to The Associated Press, the firm hired to conduct the audit had no prior experience with elections, broke rules for handling ballots and took nearly twice the allotted time to complete the process.

What’s more, its owner has supported the former president’s efforts to spread false conspiracy theories about the election. Trump, for his part, has endorsed the audit, praising its organizers in a speech in Arizona last week. “We’re gathered here in Phoenix to show our support for election integrity and for the brave and unyielding conservative warriors in the Arizona State Senate,” he said.

The audit has encouraged other Republicans in other 2020 battleground states to attempt similar shenanigans, part of a national strategy to delegitimize last year’s election results. As Jane Mayer has recently described in great detail in The New Yorker, there is a network of conservative groups spending millions to promote “election integrity” and bolster Republican efforts to change state election laws.

It is not hard to see the endgame here, especially if Trump makes another bid for the White House after capturing the Republican nomination for a third time. Not an after-the-fact fight to “stop the steal,” but a pre-emptive attempt to makes sure the election can’t be “stolen” — that is, won — by his opponent.

The American political system is barreling toward another crisis. Of course there’s no guarantee that the crisis will happen. But the current complacency coming from much of the political establishment does not leave one confident that we’ll avoid it.