Not long ago, while walking along a stretch of Broadway on the Upper West Side, I misjudged the length of a yellow light. I found myself stranded on a traffic island near a stylishly dressed woman who was sitting on a bench, holding the leash of a French bulldog wearing what looked like a miniature Moncler parka. She eyed me, warily, over her KN95. Although the length of the traffic island was between us, I automatically distanced myself as much as possible. She shouted something.

“Don’t bother!” she shouted. “The only way you’ll be distanced enough is … in hell!” 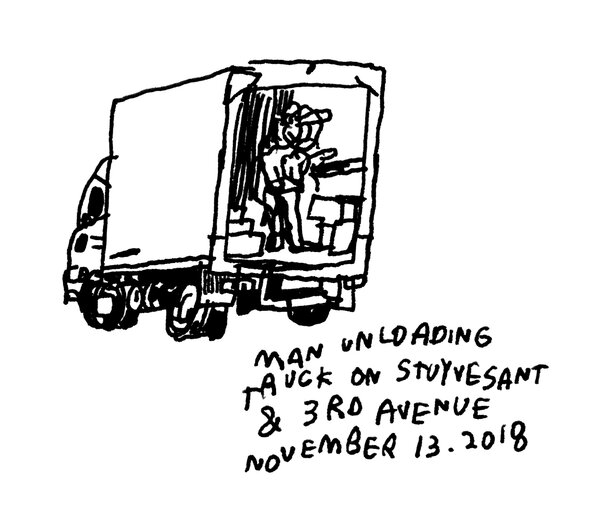 This incident was thrilling. It buoyed me for days. I had forgotten that New York could contain such unexpected gifts of human strangeness. I had forgotten that this — not buildings, not bagels, not famous bars or new restaurants, or power or sexiness or intimidatingly cut trousers or competitive cruelty or even the opening bars of “Rhapsody in Blue” — was what made city life worthwhile.

Once, such moments, however bizarre, were not so rare.

Jason Polan, an artist known for his sketches of the city, saw this; his gift to the rest of us was to immortalize them. A posthumous volume of Mr. Polan’s work was recently published, a year after he died at 37. Mr. Polan was a famously prolific chronicler of the city. He began a project he called “Every Person in New York,” rapid, emotive captures of the different figures he encountered, and got as far as some 50,000 sketches.

Despite the quixotic scale of his work, Mr. Polan’s vision of New York wasn’t grandiose or especially nostalgic. He drew whoever caught his eye, and that didn’t depend on whether his subjects said in or on line, or if they ate their pizza with a fork. They were just people who happened to be in this particular place. (Crucially, he didn’t insist that people be “New Yorkers.” He allowed each person to be of this city, at least for a moment.) Most of his subjects were anonymous, but their anonymity wasn’t some step on the way to being discovered or transformed by attention. When practiced responsibly, anonymity is one of the primary pleasures of city living.

Jason Polan died before the pandemic, when most of us still had yet to learn that those occasional breaks from urban anonymity, those small moments of connection — wordless, spoken, odd, quotidian — are a tremendous luxury.

Sadie Stein, a native of the Upper West Side, is a writer in New York.