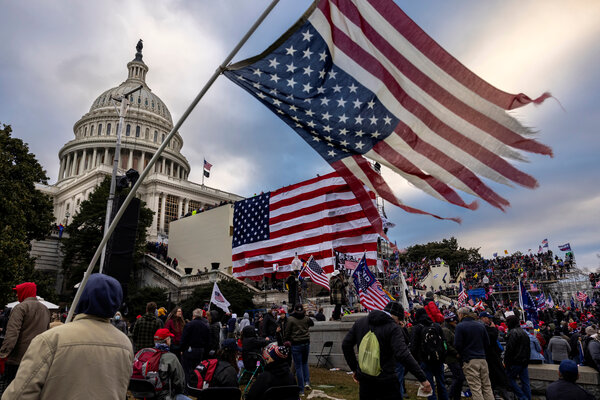 To win a Republican primary in 2022, you’ll probably need to support a coup attempt.

It’s not sufficient — David Perdue, a former senator, looks like he’s going to lose to the incumbent governor of Georgia, Brian Kemp, in next week’s primary, despite his support for the “big lie” — but it makes a difference.

The Republican nominee for governor in Pennsylvania, Doug Mastriano, won his race on the strength of his enthusiastic support for Donald Trump’s effort to subvert and overturn the results of the 2020 presidential election. As a state senator, Mastriano demanded that lawmakers invalidate Joe Biden’s electoral votes. He attended the “stop the steal” rally on Jan. 6 and has continued to accuse Democrats of fraud. Mastriano has not commented on the 2024 election, but he has let it be known that he supports the view that state legislatures can assign electoral votes against the will of the voting public.

The Republican nominee for the Senate in North Carolina, Ted Budd, was similarly committed to Trump’s effort to keep himself in office. He was among the 139 House members who objected to certifying the presidential election in Biden’s favor.

J.D. Vance, the Republican nominee for the Senate in Ohio, has not endorsed the claim that Biden stole the election from Trump, but he did play footsie with the idea during his campaign. “I think we’ve got to investigate as much as possible,” Vance said of the 2020 election results. “I believe sunshine is the best disinfectant. And we’re going to learn a lot about what happened. But, you know, I think at a basic level we already know mostly what happened.”

Overall, there are hundreds of Republican candidates in races across the country who have embraced Trump’s false claims about his defeat. Many, like Budd, voted against Biden’s Electoral College victory. Some, like Mastriano, attended the “stop the steal” protest in Washington on Jan. 6. And others signed legal briefs or resolutions challenging Biden’s victory.