Bret Stephens: Hi, Gail. We’ve covered so much ground over all these years of discussing the Trump presidency. Do you think the damage Donald Trump has done to the country is irreparable? Or can we find our way back to something approaching normality?

Gail Collins: Bret! We’re just on the edge of getting rid of this man, after four years of total trauma. I think we deserve at least a couple of nights of cheer before we tackle the irreparable damage issue.

Bret: Now you’re making me type with crossed fingers. I’m still seriously worried we’re going to be hit by a second Trump asteroid. I’m not liking the numbers in Florida and particularly Iowa.

But about the after — I’m a pretty optimistic person, so I’m just not going to buy into the idea that things can’t be fixed. I grew up during the civil rights and antiwar movements. Families torn apart by politics. And if all the problems certainly weren’t solved, I think we came out of that era a better country.

Bret: Absolutely true for African-Americans, women, and the gay and lesbian community. Less true in terms of social trust and shared values. But I still like your optimism.

Gail: There’s one part of this I’ve been really haunted by: social media. Perfectly happy to acknowledge all the great progress in bringing folks together and giving voices outside the mainstream a better chance to be heard. But it’s made it so easy to declare war on various chunks of society that your chunk finds irritating, or evil for that matter.

Bret: I suspect history will come to think of “social media” as one of history’s more Orwellian terms. What it really should be called is antisocial media. If it has brought people closer together in virtual space, it has also made it easier for them to remain alone and isolated in physical space. If it has made it easier for people to find communities of like-minded people, it has also made them more hostile to anyone who thinks a little differently from them. If it has facilitated various kinds of personal expression, it has also made it much easier for people to be uncivil and nasty. If it has offered a platform for billions of people to express their political views, it has also concentrated power in a tiny handful of tech executives to suppress views. Altogether, social media has been the mother of all unintended consequences.

Speaking of unintended consequences, Gail, it has also brought me a little closer to Elizabeth Warren. I’m really beginning to come around to the idea that we need a totally different government approach to big tech.

Gail: OK world — we are going to stop right here so Bret can tell us more about whether we would all be better off with Elizabeth Warren as the Democratic nominee.

Bret: Not at all. I think it would be a much tighter race right now if Warren were the nominee. A liberal senator who comes in third in the Massachusetts Democratic primary is not the strongest contender to take down Trump.

That said, she was right — and I was wrong — about the danger to our democracy posed by the extraordinary concentration of financial and political power in Silicon Valley. There are a few ironies here, not the least of which is that much of the tech industry tends to lean pretty far to the left. But when a handful of relatively young tech C.E.O.s have at least as much power over the limits of free speech as our entire judiciary system, there’s a serious problem. There’s also a serious problem when the industry tries to blur the difference between being platforms that merely provide a vehicle for people to say whatever they want (and are therefore not subject to libel laws) and publishers that regulate the content of the speech they host on their site.

But that reminds me, Gail: Are you still sad Warren didn’t win? Anything about the prospect of a Biden presidency give you pause?

Gail: Well I’d definitely be sad about Warren not getting the nomination if I thought for sure she’d win the election. Have to admit I think she might have had a harder time than Joe Biden, whose great virtue is a sort of … lack of specificity. We all know who he is and what in general he believes, but we mostly think of him as a nice, moderate guy who will work well with others.

And of course, if you actually listen to Biden he has a very clear and very progressive program. Plus a nice smile. More than anybody else currently in the race is offering.

Bret: Our colleague David Brooks had a smart column last week on all the things Biden has done right. The most important of them is that he’s steered clear of fighting the election along cultural and ideological lines and instead made it about steadiness and decency. I’m not sure Warren or Bernie Sanders would have resisted the temptation to take the culture-war bait that Trump keeps throwing at them. The president’s problem is that he’s desperately trying to run against the antifa left, and what he’s got instead is an opponent who looks about as radical as Howard Cunningham from “Happy Days.”

Gail: I foresee a political science graduate student of the future writing a paper: “Election 2020: Archie Bunker versus Howard Cunningham.” 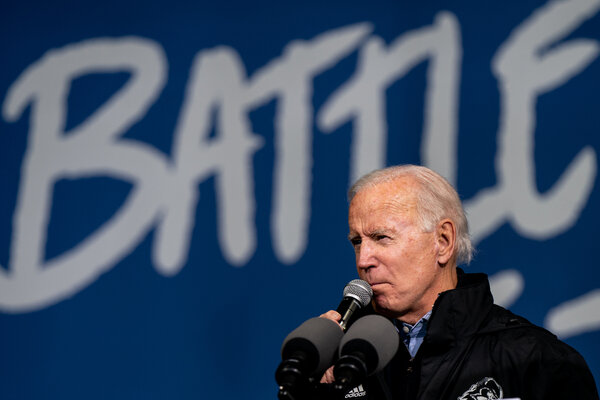 Bret: In fact, I’ve been saying for some time that, for anyone concerned about the increasing radicalism on the left, the best way to contain or defuse it is to have Biden in the White House. If, God forbid and heaven forfend, Trump wins, moderates will lose credibility in the Democratic Party while Trump spends the next four years lighting culture wars like an arsonist in a hayfield.

Gail: Well as you know, I was not overwhelmed by the imagination of Biden’s agenda in the primaries. But the idea of having a president who actually wants to declare war on global warming seems so revolutionary now, we’re temporarily on the very same page. Temporarily. Until, say, the first State of the Union address.

Bret: I suspect Biden will declare war on global warming the way past presidents declared war on cancer: By throwing a lot of money at it and hoping something works. He’ll bring America back into the Paris Climate Accord. He’ll spend more on renewables. Frankly, the most effective thing he could do is impose a carbon tax, which is something the Obama administration never had the political guts to do.

Gail: Once again we are in accord, in a collegial mindmeld until we can return to the good old days of fighting about taxes. Meanwhile, it’s very possible that Biden will have a Democratic Senate majority to back him up. How are you feeling about that?

Bret: The only clear Republican pickup I’m seeing is Tommy Tuberville’s race against Doug Jones, the Democratic incumbent in Alabama. Jones is the guy who saved us from Senator Roy Moore, which means he deserves the nation’s eternal gratitude, and maybe a nice job in a Biden administration.

Gail: Well, it would have been lovely to save the Senate from Tommy Tuberville, too, but you can’t really expect Jones to beat an Auburn football coach.

Bret: On the other hand, the G.O.P. incumbents Susan Collins and Martha McSally also look like political goners, though I’m having trouble squaring McSally’s lagging position in the race with Trump’s competitiveness in Arizona. If Democrats have a great night on Tuesday, Jon Ossoff beats David Perdue in Georgia. If Republicans have a great night, Jason Lewis beats Tina Smith in Minnesota.

Gail: And if things go the Democrats’ way — fingers crossed, fingers crossed — Cal Cunningham knocks off the dreaded Thom Tillis in North Carolina. I admit Cunningham has not run the world’s greatest race, what with the sex scandal and all. But as you know I am confident that sexual fidelity is way, way down on voters’ priority lists.

Bret: On a different note, Gail, can I add how sad I am that Sean Connery died? Here was an actor who was so fundamentally awesome that he could convincingly play an Irish cop, an English spy and a Russian submariner without deviating one bit from that unmistakable Scottish accent. Sort of like a president who can play a bully, a buffoon, a blowhard and a bore in exactly the same Queens accent, too!

Related posts:
Hot News
Nick Ferrari erupts at Sunak and rages ‘stop telling me how well you’ve done’ in radio row
Whakaari / White Island: Death toll rises to 22 as police confirm Horst Westenfelder succumbed to injuries from the disaster
Watch Live: Judith Collins and Jacinda Ardern to speak to MPs after State Opening of Parliament
Karaka pōhutakawa tree chainsaw massacre: Man pleads guilty
Asian shares slip as investors pause for breath after massive rally
Recent Posts
This website uses cookies to improve your user experience and to provide you with advertisements that are relevant to your interests. By continuing to browse the site you are agreeing to our use of cookies.Ok