A Times reporter’s new biography of Trump shows the boundlessness of his self-regard. 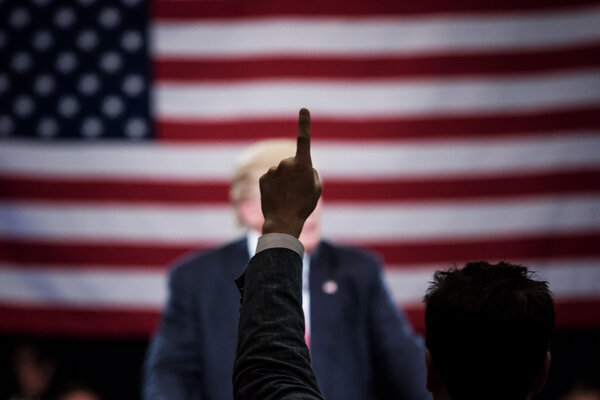 Frank Bruni is a contributing Opinion writer who was on the staff of The Times for more than 25 years.

Maggie Haberman’s forthcoming book about Donald Trump, “Confidence Man,” is chockablock with fresh anecdotes and insights, just as her reporting on him over the years has been. He tells her, for example, that he’s glad for his turbulent time in the White House because so many other rich men have tiny or nonexistent public profiles, their bank accounts bloated but their names unknown. For him, the presidency was Page Six on the Potomac.

But perhaps the most revealing aspect of the book, to be published next week, is that Trump gave Maggie, a Times reporter since 2015, three interviews for it. This is the same Trump who vilified her on Twitter, called her names and cast her as the personification of “fake news.” Maggie just pressed on, asking the right questions, getting the right people to answer them and seemingly trusting on some level that Trump would never wholly cut her off. She can recognize a performance when she sees one. And she can hear in a narcissist’s self-regarding soliloquies the aching need to babble on.

Their relationship says so much about Trump — some of it long obvious, some of it less so. It proves his awareness of the lies he tells: If he really believed, as he publicly claimed, that Maggie was a fabulist, he’d deem it pointless and potentially ruinous to talk with her. He’d stop. But he clearly respected her, even as he trashed her, the ugly act of which confirms the void where a moral person’s conscience resides.

He’ll do anything to survive. And he’ll do anything for an audience. Maggie (a friend of mine) and the other journalists whom he publicly insulted but privately indulged were, to him, reserves of precious attention, their discerning gazes trained on him, their busy thoughts dedicated to the puzzle of him, their notepads and audio recordings and television cameras a conduit to ever greater fame. There was danger in letting them in, peril in having them around, but the alternative was worse. They might give prime real estate on the evening’s newscast to some other circus act. They might write books about a lesser clown.

“He had an almost reflexive desire to meet with nearly every author writing a book about him,” Maggie noted in an adapted excerpt from “Confidence Man” that appeared recently in The Atlantic. Of course he did. Part of that is surely a matter of confidence — the double entendre title of her book is sagely chosen — and his belief that he could maybe win over those authors just a bit and reshape the narrative ever so slightly in his favor.

But more of it is a glutton’s insatiable hunger to be listened to and looked upon.

We journalists are rightly dissatisfied with the paucity of interviews that President Biden gives, and we fairly note that the person at the Resolute Desk must be held accountable — and must communicate with voters — to a degree that’s not possible if the news media is kept at too distant a remove. Biden’s reticence is also fuel for his detractors, who present it as evidence that he’s mentally wobbly and afraid of misspeaking.

But it does at least suggest the kind of discipline that Trump lacks. It also demonstrates that Biden’s vanity, unlike Trump’s, has limits.

To Trump, all of us in the news business and all of the people at his rallies are mirrors, assembled into a fun house where every room, every wall, every corner shows him the visage that he relishes more than any other: his own.

For the Love of Songs

I’ve never been able to follow the topography of “Landslide.” “I took my love, I took it down,” the song begins. “I climbed a mountain, and I turned around.” That’s a lot of cross-purposes cardio. Good thing the music to which the words are set is so lovely. Better still that they’re sung by Stevie Nicks when her voice was at its tenderest.

Written by her, “Landslide” appeared on the first album that the band Fleetwood Mac released after it added her and her romantic partner at the time, Lindsey Buckingham, to its lineup. That album, simply titled “Fleetwood Mac,” appeared in 1975. It yielded bigger hits than “Landslide,” including “Rhiannon,” which was also written and sung by Nicks.

But “Landslide” became a kind of classic that those songs didn’t, bits of it scribbled into journals and yearbooks, the whole of it played at weddings and birthdays.

It’s a testament to the power of a few beautifully turned lines, and I don’t mean the ones I quoted above. I mean these:

Well, I’ve been afraid of changing
’Cause I’ve built my life around you
But time makes you bolder
Even children get older
And I’m getting older, too

I can’t imagine a single listener who doesn’t recognize a key turning point or particular relationship in that passage. And the cadence of the words is as accessible as the sentiments they express.

“Landslide” is in some ways a curiosity, because so much else that Nicks wrote over the years fell so far short of it. I know because I’ve been an attentive, steadfast and hugely appreciative fan: One of the greatest thrills of my career was finagling an interview with her in her hotel suite after a Fleetwood Mac concert in Atlanta.

For every lyrical gem in her prodigious catalog of songs — for every “Landslide,” “Silver Springs” or “Sisters of the Moon” — there’s a head-scratcher like “Gate and Garden” or “Ooh My Love.” That disparity is actually a consolation: We all have our valleys as well as our peaks.

The effect of “Landslide” has morphed over time. When Nicks sang it early on, it seemed romantically precocious. In more recent performances, it communicated something closer to wistfulness. “I’m getting older, too,” is no longer a young idealist’s bitter epiphany. It’s a fierce survivor’s statement of fact.

Either way, it’s gorgeous, and I thank Barry Larocque of Ottawa; Marie Parker of Edmonton, Alberta; and Chase Pellegrini de Paur of Durham, N.C., among others, for urging me to revisit it.

“For the Love of Songs” appears monthly(ish). To nominate a songwriter and song, please email me here, including your name and place of residence, and put “Songs” in the subject line. “For the Love of Sentences” will return with the next newsletter; you can use the same link to suggest recent snippets of prose, with “Sentences” in the subject line.

What I’m Reading and Doing

I’m often told how vital and effective sanctions are. Then I trip across confident assertions that sanctions seldom accomplish what they’re supposed to. So I’m thankful that experts like my Duke University colleague Bruce Jentleson are around to resolve my confusion and explain it all, as he does in his new book, “Sanctions: What Everyone Needs to Know.”

I have less and less faith in polls, but that doesn’t stop me from obsessing over them. I did so this week for an illuminating Opinion round table with two spirited experts on the topic.

If you, like me, consider Ina Garten to be evidence that deities do walk (and cook) among us, you might want to join her and me for an online conversation about her new book, “Go-To Dinners,” on Wednesday, Oct. 26, at 8 p.m. Eastern. Ticket information is here. Also, I’m onstage with MSNBC’s Katy Tur to discuss my latest book, “The Beauty of Dusk,” at the Morristown (N.J.) Festival of Books at 7:30 p.m. Eastern on Friday, Oct. 7. Details here. And I’m interviewing my Times colleague and friend Bret Stephens onstage at Duke University at 5:30 p.m. Eastern on Thursday, Oct. 13. Free. Open to the public. Details here.

On a Personal Note

How do you succinctly flag the ineluctable dysfunction of the brood in your tale while suggesting the mischievous spirit of its telling?

The posters and ads for “The Royal Tenenbaums” met that challenge with this tag line: “Family isn’t a word … It’s a sentence.”

How do you establish the comic bona fides of an animated movie about a flock of fowl yearning for liberation from the farm where they’re cooped up? “Chicken Run” came up with several excellent tag lines, including this: “Escape or die frying.”

In last week’s newsletter, I described my fondness for movie tag lines — also known as straplines — and mentioned the one for “Alien,” which I consider the GOAT: “In space no one can hear you scream.” I invited you to write in with your favorites.

And you did! Scott Williams of Salt Lake City and Douglas Mitchell of Edmonton, Alberta, were among those who nominated the tease for “Tenenbaums.” Dan Humiston of McKinleyville, Calif., and Carol McCormick of Sacramento, among others, mentioned the one for “Chicken Run.”

Here’s a sample of the scores and scores of other tag lines you praised:

For “Bride of Chucky,” a sequel to the horror movie “Child’s Play,” about a murderous doll named Chucky: “Chucky gets lucky.” (Tom Van Blarcom, Bangkok, and Peter Kinney, Damariscotta, Maine)

For John Carpenter’s terrifying remake of “The Thing,” about a monster that uses humans as hosts: “Man is the warmest place to hide.” (Matt Lee, Milwaukee)

An updated, 1988 version of “The Blob” made this unimpeachable observation: “Terror has no shape.” (Michael Souveroff, New York City)

The movie version of “Buffy, the Vampire Slayer,” introduced its protagonist this way: “She knows a sucker when she sees one.” (Sean Patrick Carlin, New York City)

“Platoon” turned philosophical: “The first casualty of war is innocence.” (William Schweers Jr., Pittsburgh, and Michael Carmichael, Chapel Hill, N.C., among many, many others)

Comedies have provided a bumper crop of great tag lines, as the following ones demonstrate:

“Tommy Boy”: “If at first you don’t succeed, lower your standards.” (John Aiello, Newburgh, N.Y., and Jim Bosha, Scranton, Pa., among others)

“The 40-Year-Old Virgin”: “The longer you wait, the harder it gets.” (Christine Summy, Rosemount, Minn., and Robert Bryson, Salt Lake City, among others)

“The Naked Gun 2½: The Smell of Fear”: “If you see only one movie this year … you oughta get out more often.” (Scott Danahey, Chicago, and James Van Wickler, Sunnyside, N.Y., among others)

“The Naked Gun 33⅓: The Final Insult”: “From the brother of the director of ‘Ghost.’” (Mary Caldwell, O’Fallon, Mo., and Scott Baker, Gambier, Ohio)

“Bill and Ted’s Excellent Adventure”: “History is about to be rewritten by two guys who can’t spell.” (Michael Herzmark, San Pedro, Calif.)

Several but not all of the above appear in a Hollywood Reporter compendium of 20 great movie tag lines. That compendium omits two tag lines, not from comedies, that migrated well beyond their movies to become conversational touchstones all their own:

“Apollo 13”: “Houston, we have a problem.” (Alfred Sainato, Metuchen, N.J., and Jennie Fogarty, Bethesda, Md., among others)

“Star Wars”: “A long time ago in a galaxy far, far away …” (Lois Bronnenkant, Medford, Mass., and Phyliss Dalmatian, Wichita, Kan., among others)