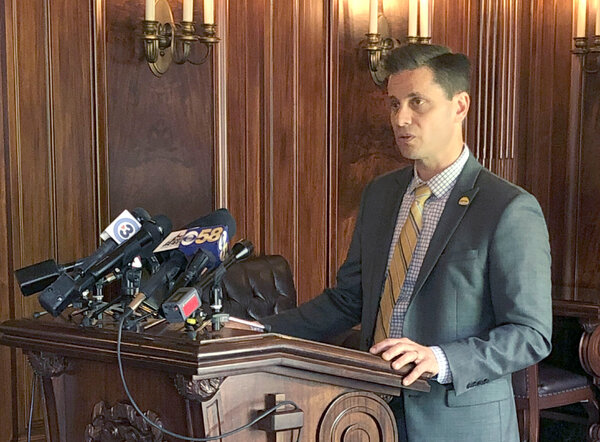 Former President Donald Trump recently accused three Wisconsin Republican leaders of “working hard to cover up election corruption” as he continued pushing lies about the November presidential vote. Mr. Trump delights in turning his fire on members of his party who he feels are being insufficiently servile. Many promptly prostrate themselves; a few shrug it off.

Then there is State Senate President Chris Kapenga of Wisconsin, one of the Republicans singled out by Mr. Trump. He responded to the former president with a letter that approaches North Korean-style levels of Dear Leader obsequiousness.

It is tempting to dismiss Mr. Kapenga’s missive as a desperate plea for Mr. Trump to stop picking on him — which it is. But it also provides a valuable master class in the art of Trump sycophancy. The text of the letter below has been annotated for instructional purposes.

One of the most frustrating things to watch during your presidency was the continued attacks on you from fake news outlets with no accountability to truth.

It is helpful early on to slip in a common Trumpian term like “fake news” or “Deep State” or “alternative facts.” This makes clear that you are operating in the same alternative reality as Mr. Trump.

I can’t imagine the frustration you and your family felt. Unfortunately, in our positions of public service, we have to accept the reality that often “truth” in the media is no longer based on facts but simply what one feels like saying.

Media bashing is a requirement when soliciting Mr. Trump. If you’re not willing to go there, don’t even bother.

This leads me to your recent press release stating that I am responsible for holding up a forensic audit of the Wisconsin elections. This could not be further from the truth.

The segue here from sucking up to gentle criticism is a smidge bumpy. And keep in mind that “truth” is a malleable concept for Mr. Trump.

Let me first say that very few people have the honor of being named publicly by a United States president.

Now you’re back on track: Having raised your concern, it is best to immediately backpedal and layer on more flattery. Plowing ahead with the details of your complaint without proper fertilizing risks getting Mr. Trump’s dander up.

I never imagined mine would be mentioned, much less in this light, from a President that I have publicly supported, and still support.

The genius of this sentence is that it sounds as though you’re expressing gratitude, even as you are expressing dismay.

I feel I need to respond even though you will likely never hear of it, as the power of your pen to mine is like Thor’s hammer to a Bobby pin.

Bonus points for going with a deity from Norse mythology. Mr. Trump clearly has a soft spot for the region, to the point that he expressed a desire for more Norwegian immigrants and even eyed buying Greenland from Denmark.

Nevertheless, I need to correct your false claim against me.

Oof. Another misstep: “False” is such a harsh, judgmental word. Would have been safer to go with “inaccurate” or, better still, “imprecise.”

I never received a call from you or any of your sources asking about the election audit. If you had, I would have told you that long before your press release I called the auditor in charge of the election audit that is taking place in Wisconsin and requested a forensic component to the audit.

Suggesting that Mr. Trump has behaved in any way other than perfectly is always dicey. What saves you here is immediately following up with reassurances that you, in fact, behaved exactly as he wanted.

Prior to owning several businesses, I was an auditor, so I understand the importance of this being done to determine what took place in the last election. This will help guide us as legislators to put fixes in place for any issues found, and more importantly, to ensure the integrity of elections moving forward.

I made specific requests on procedures and locations, both of which I have not, nor will not, disclose. If I am not satisfied with the procedures performed, I will request additional work be done. If anyone illegally attempts to hinder information from being obtained, I will use my subpoena powers to get it.

Always good to throw in a bit of tough-guy posturing about how none of the libs or Deep State plotters can stand in the way of your mission.

This leads me back to your press release. It is false, and I don’t appreciate it being done before calling me and finding out the truth. This is what both of us have fought against.

It is unclear what anyone is fighting against here, but clarity should never be an impediment to flattery.

Being cut from similar cloth in our backgrounds, and knowing that reparation must always be of more value than the wrong done, I have two requests.

Curiously, Wikipedia identifies Mr. Kapenga as an accountant and business owner who has been in state politics for more than a decade. This would appear to make him as similar to the high-flying reality TV star and New York real estate scion as corduroy culottes are to cheetah-skin hot pants.

First, I ask that you issue a press release in similar fashion that corrects the information and also encourages people to support what I have requested in the audit.

Smart to sweeten your real ask by pairing it with something that Mr. Trump wants.

Second, you owe me a round of golf at the club of your choice.

Valiant attempt to lighten the mood while also playing to Mr. Trump’s vanity regarding the family business. Plus, offering him the chance to beat you at golf is smart, even if it requires you to throw the round.

I write this as I am about to board a plane due to a family medical emergency.

In addition to my Trump socks, I will pull up my Trump/Pence mask when I board the plane, as required by federal law.

This bit of toadyism may feel like it’s going too far, but, with Mr. Trump, too far is never enough. And it never hurts to take a shot at the feds.

I figure, if the liberals are going to force me to wear a mask, I am going to make it as painful for them as possible.

Always remember that the throbbing heart of Trumpism is owning the libs.

I will continue to do this regardless of whether or not I ever hear from you.

Nice dismount! Emphasizes that you have internalized Trumpian values and will live by them even if the former president does not heed your imploration.

Thank you for doing great things as our president.

Always close with straight-up bootlicking. Don’t try to be fancy — or subtle.