For a few minutes on Sunday night, President Biden sounded a little like a union leader. “Unions put power in the hands of workers,” he said in a video statement of support for the union drive at an Amazon fulfillment center in Bessemer, Ala. “They level the playing field. They give you a stronger voice for your health, your safety, higher wages, protections from racial discrimination and sexual harassment. Unions lift up workers, both union and nonunion, but especially Black and Brown workers.”

Biden also spoke directly to employers who might try to subvert or sabotage an organizing drive. “There should be no intimidation, no coercion, no threats, no anti-union propaganda. No supervisor should confront employees about their union preferences. Every worker should have a free and fair choice to join a union. The law guarantees that choice. And it’s your right, not that of an employer, it’s your right.”

Biden is not the first president to speak in support of unions, but he may be the first to speak so publicly — and so directly — in their favor (certainly since Harry Truman). The words themselves are ordinary, but the context, an American president speaking in support of the most high profile organizing drive in the country, makes them extraordinary. And that, in turn, raises expectations for what Biden can and should accomplish as president on behalf of the labor movement.

Typically, Democratic presidents aren’t so specific in their support for organized labor. Barack Obama, for example, stuck to platitudes at his 2015 White House summit on “worker voice.” “Labor unions were often the driving force for progress,” he said, “The middle class itself was built on a union label. And that middle class that was built was the engine of our prosperity.”

Before Obama, Jennifer Klein, a professor of history at Yale, wrote by email, “Presidents Carter and Bill Clinton basically didn’t even believe there should be unions. They saw them as relics of a decidedly different era of American capitalism. Unions didn’t really function in a modern economy. Free trade, ‘knowledge’, and new technologies would eliminate that old politics of class conflict and the need for much of the New Deal apparatus.”

Even Franklin Roosevelt was, as the historian William E. Leuchtenburg wrote in 1963, “somewhat perturbed at being cast in the role of midwife of industrial unionism.” When pressured by events to take a side in the “Little Steel” strike of May 1937 — in which steel workers under the C.I.O. and the Steel Workers Organizing Committee clashed with a group of independent steel producers, their strikebreakers and law enforcement — Roosevelt blanched. “The majority of people are saying just one thing,” the president said. “A plague on both your houses.”

Compare this to Biden, who stepped in during an organizing drive and ongoing union election to support workers, rebuke hostile employers and remind the country that the federal government has an obligation to allow or even encourage union organizing. Relative to the rhetoric of most of his predecessors, Biden’s brief address stands as one of the most pro-union statements ever issued from the White House.

What is also striking is how the president’s statement reflects the changing nature of the labor movement. Biden says explicitly that unions help protect workers from sexual harassment and racial bias, and he ties the fight for union representation to the nation’s “reckoning on race” and the “deep disparities that still exist in our country.”

It is worth saying that the majority of workers at the Amazon facility in Bessemer are Black, and a large proportion of them are women. Across the country, Black and Hispanic workers, especially women, are at the forefront of struggles for higher wages and greater dignity. Unions are diverse, and unionized workers are no longer just the hard hats and stevedores of the industrial age.

“That is the old imagining of the union base,” said Kirsten Swinth, an associate professor of history at Fordham University. “But that’s not the reality of the American labor movement today. When Biden speaks out the way he does, he is speaking to the working class that has come into being since the 1970s.” 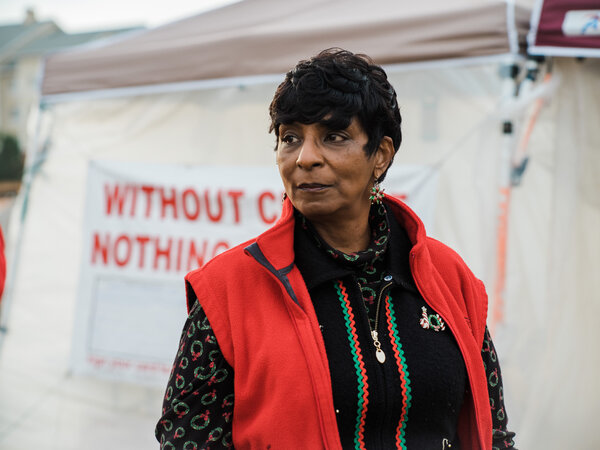 Presidential rhetoric is not all powerful, but it does matter. Biden’s statement will almost certainly reverberate through future organizing campaigns, to be used against hostile employers. It also plants a flag for the Democratic Party, not just in favor of unions generally but worker power specifically. And to that end, it raises the urgency for pro-union executive action and pro-worker legislation.

On his own, Biden can raise the minimum wage for federal contract employees to $15 per hour, require contracts to go exclusively to employers who remain neutral in union elections and temporarily bar contracts for employers who illegally oppose union organizing. He can also, pending Senate confirmation, fill vacancies on the five-member National Labor Relations Board, which sets rules for collective bargaining, conducts and certifies union elections, and adjudicates labor disputes. A Democratic majority on the board — achieved by filling both an existing vacancy and a scheduled one in August — would allow Biden to reverse anti-union rulings from the Trump era and begin to make the government less hostile to labor rights.

The surest way to bring about major change, however, is through legislation. Last year, the House of Representatives passed the Protecting the Right to Organize Act, which would grant workers new collective bargaining rights as well as penalize employers that retaliate against workers who organize.

The obstacle here isn’t Biden, however, it is the Senate and its supermajority requirement for legislation. And with that in mind, perhaps the best thing Biden’s rhetoric can do beyond the specific situation in Alabama is put a little more pressure on Democrats to bring majority rule to the chamber and let Congress finally govern on behalf of the country and its workers.