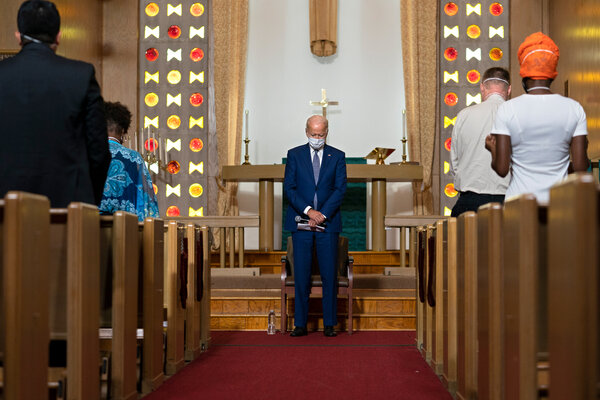 Re “The Bishops Are Wrong About Biden and Abortion” (Opinion guest essay, June 28):

Garry Wills closes his essay stating that the American bishops “hate this pope and this president anyway.” These are strong words for a Catholic to digest.

I was raised a Roman Catholic, and I attended a Catholic grade school, high school and college. Catholicism and its teachings of prayer, forgiveness and acts of kindness are innate. Yet over the last 10 years, I am unable to identify an institution that has tried harder to push me away than the Catholic Church in the United States.

I am left with the distinct impression that the church is failing and feels that it must become more politically aggressive to retain membership and funding.

The church’s single-minded attention to abortion is hypocritical. The church tunes out life-and-death issues like gun use, drug and alcohol abuse, sexual abuse and mental health.

Get out of the business of politics, American bishops; get back into the teachings of Jesus.

Can a man write the definitive article on abortion and faith? Well, no one person can, but Garry Wills has come as close as humanly possible, especially for a (brilliant, wise, learned) guy.

I was exultant to hear his voice once again. The combination of measured yet incisive reason, historical sensibility, seasoned faith and compassion dazzles and warms my feminist, postmodern Catholic heart.

Even Catholics opposed to contraception must see that birth control is preferable to abortion.

The only effective and compassionate way to prevent abortion is to provide easy access to contraception and follow this up with free quality prenatal care, free hospital deliveries for childbirth and free health care for babies and children up to 10 or older.

These measures would prevent most abortions in the United States.

Additionally, free public health nurse home checkups for expectant mothers, and visits to moms and babies during the first six months of life, would help prevent the tragedy of poor maternal-child health outcomes associated with race and amplified by poverty.

Re “Between the Bishops and Joe Biden” (column, June 23):

Ross Douthat seems fine with using the Catholic Eucharist as a political football. His issue is whether now is the right time for American bishops to use it to fight abortion.

Pope Francis has described Holy Communion as the “bread of sinners.” The contrast with the conservative view that Mr. Douthat endorsed, that it is a prize that needs defending from those judged unworthy, could not be more stark.

It gets to the heart of grave differences among Catholics over the meaning of their faith; whether it emphasizes inclusion and mercy, in keeping with the Jesus of the Gospels, or maintains the defensive crouch of exclusivity that Mr. Douthat describes to issues beyond abortion.

Mr. Douthat crafts his argument against abortion as a crusade against moral decay without mentioning women’s health as having any part of the issue. The church continues to refuse to admit women to the priesthood and other frontline church roles, and presumably celibate male clergy dictating reproductive health policies will continue to invite charges of hypocrisy.

Ross Douthat states that withholding communion from politicians who support abortion rights is a “pastoral act.” Further, he states that no Republican failure to fund health care has had the “lethal consequence” of taking millions of innocent lives that abortion has had. It is a myopic view.

What about the Republican-supported gag rule that withdrew funding from health care organizations in developing countries if abortion services were mentioned? This affected not only contraceptive services, but also general health care, including treatment and prevention of H.I.V.-AIDS, tuberculosis and malaria.

Who is accounting for the millions of medically indigent people whose lives were cut short because of this rule, and lamenting their incalculable suffering?

Conservative Catholic bishops who supported that gag rule have a lot to answer for. Maybe they should be repenting of this, rather than thinking about punishing President Biden, whose Catholic spirituality is at the core of his being, and thinking that could possibly be a pastoral act.

A Check on Democrats in California?

Here in the blue state of California, Republican irrelevance in urban and suburban areas could not be more pronounced.

Our supermajority Democratic Legislature sometimes goes overboard with unchecked liberalism. A Republican check and balance might not be bad for our state. But not one that supports Donald Trump, his big election lie and the radicalized values that undermine our democracy.

The Silver Lining in the Fitness Craze

Re “The Failed Promise of the Aerobics Revolution” (Opinion guest essay, June 21):

Danielle Friedman missed a critical component regarding the success of the fitness industry in the 1980s. Many women were stuck at home, designated with responsibility for housework, children and charity work. I owned a fitness company in the Chicago suburbs in those days. In my classes, women found camaraderie and friendships, and it was a place to network.

It was therapy. Many of those close friendships have lasted through decades. Those were the days!