Saguaro cactuses, some nearly a century old, in shards on the desert floor. Jaguars, lost, because a metal wall has blocked their migratory path. Endangered species homeless because their critical habitats have been destroyed.

Living and working along the U.S.-Mexico border means watching the surreal, slow-motion leveling of the wild and fragile ecosystems I’ve spent my career fighting to protect.

Contractors have bulldozed through all four southern border states, with nearly 400 miles of wall built or replaced under the Trump administration. But Arizona, with 372 miles of shared border of Mexico, has borne the brunt of the environmental damage. These are parts of the country so spectacular — with ragged mountainous terrain and sweeping desert valleys — that they’re protected by state, national and international laws.

Most of the harm has been inflicted in the past year, after the U.S. Supreme Court allowed wall construction to proceed, even though multiple lower courts ruled the funding for the project unconstitutional. Construction crews broke ground in August 2019, digging trenches and bulldozing wilderness to install 30-foot tall steel bollards filled with concrete.

Much of this has flown under the radar for most Americans, who’ll never get to experience these spectacular Sonoran Desert landscapes as they once were.

Late last summer, you could drive though Organ Pipe Cactus National Monument, a UNESCO Biosphere Reserve, without seeing hundreds of butchered saguaro cactuses plowed over and rotting in the shadow of the new wall. 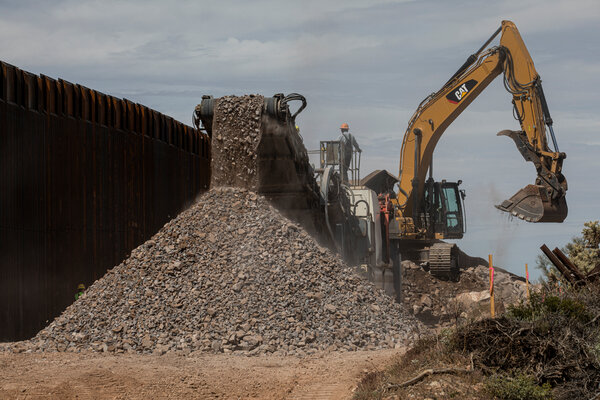 You could take a trip down one of Arizona’s most rugged and storied travel routes, the Devil’s Highway through the Cabeza Prieta National Wildlife Refuge, without choking on the dust of hundreds of construction vehicles.

You could walk the 800-mile Arizona Trail and arrive at its stunning southern terminus, a rugged pass in the Huachuca Mountains and a key wildlife corridor for endangered jaguars and ocelots. There you could gaze into the serene wild lands of Sonora, Mexico, without peering through the tiny gaps of steel bollards.

And only a year ago, Mexican wolves, Sonoran pronghorn, kit foxes and mule deer could wander freely across the invisible line, just as they’ve been doing for millenniums, in search of food, water and mates.

Normally local, state, and federal environmental laws would protect the borderlands from this kind of industrial-scale destruction, and allow local communities a say in new federal projects. But in 2005, Congress passed the REAL ID Act, which included a provision that allows the secretary of homeland security to waive laws that the secretary deems an impediment to building walls and roads along U.S. borders. The Trump administration used a provision of the act to cast aside dozens of laws that protect clean air and water, endangered animals and Indigenous burial grounds to rush wall construction.

Wildlife cameras capture confused animals stopped dead in their tracks in front of the barrier. A family of javelina pace back and forth for five hours looking for a way south. A pair of bobcats, one on each side, try to reunite. Until recently, those animals could have walked under waist-high vehicle barriers.

Documents obtained by the Center for Biological Diversity through the Freedom of Information Act paint a distressing picture. Bill Radke, who manages the San Bernardino National Wildlife Refuge in southeastern Arizona, warned last year that the extraction of groundwater to build the wall posed a “dire emergency” to the refuge, home to lush wetlands and endangered desert fish. He called the extraction of 700,000 gallons of groundwater per day “the current greatest threat to endangered species in the Southwest region.”

The roughly 20-mile section of wall through the wildlife refuge and San Bernardino Valley is nearly complete.

The Tohono O’odham people have lived between this region, and northern Sonora, Mexico, long before the United States and the advent of borders. Now a security fence, surveillance towers and border checkpoints separate their ancestral lands and citizens.

Tribal members have watched the blasting of their sacred sites and destruction of natural history, like the fragile Quitobaquito Springs at Organ Pipe. As Customs and Border Protection held a news conference to showcase explosions on Monument Hill, where Indigenous remains have been laid to rest, the tribal chairman, Ned Norris Jr., was tearfully testifying before Congress that the destruction has “totally forever damaged our people.”

The damage the border wall has inflicted in just the past year is incalculable. Much of it will last forever. No amount of money could repay the O’odham and all Indigenous people of the borderlands for the sacred sites, cultural history and natural heritage that’s been destroyed.

To right these wrongs, we must start somewhere. Tearing down the wall would be a good start.

Laiken Jordahl (@LaikenJordahl), a former National Park Service naturalist, works at the Tucson, Ariz., based Center for Biological Diversity to protect wildlife, ecosystems and communities throughout the U.S.-Mexico borderlands.